On April 8th and 9th 2014, the 6th Annual AA-ISP Leadership Summit was held at the magnificent Intercontinental Hotel in Chicago, Illinois. The Annual AA-ISP Summit is the largest gathering of Inside Sales leaders in the world and has established a reputation as the de facto conference for delivering quality content that is rich with relevant, useful information. 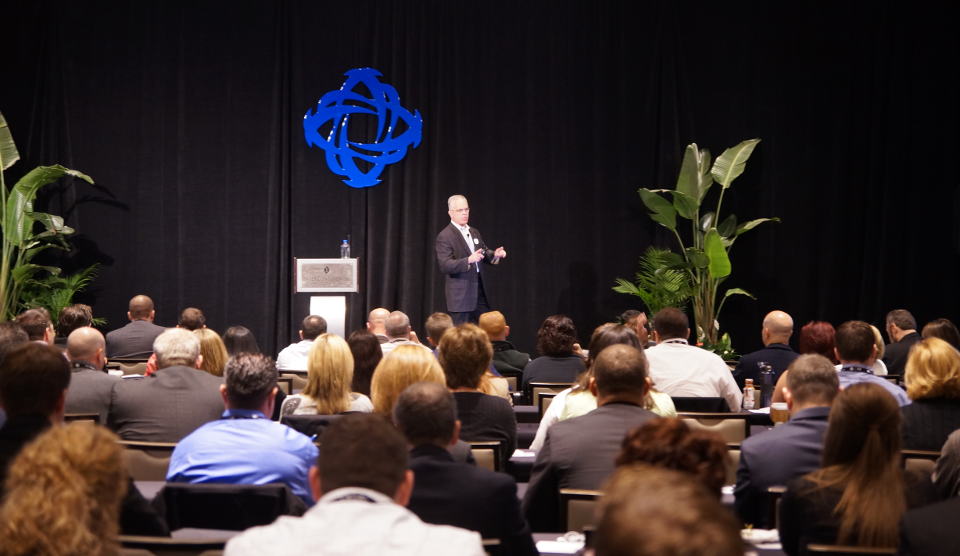 With approximately 600 attendees from around the world in attendance, the 2014 AA-ISP Summit had a sense of purpose from the start. The traditional opening video, set with a Beatles overtone, highlighted the growth and development of the Inside Sales channel over the years and the significant role that we, as leaders, play within our organizations. As the video concludes, we look into the future and dream about where we can be, where we will be, and finally bringing home the 2014 theme "Success is Calling".

AA-ISP Founder, Bob Perkins, built on this theme as he welcomed attendees and discussed the incredible growth Inside Sales is experiencing, some of the challenges that will confront us, and the significance that leadership plays in success. 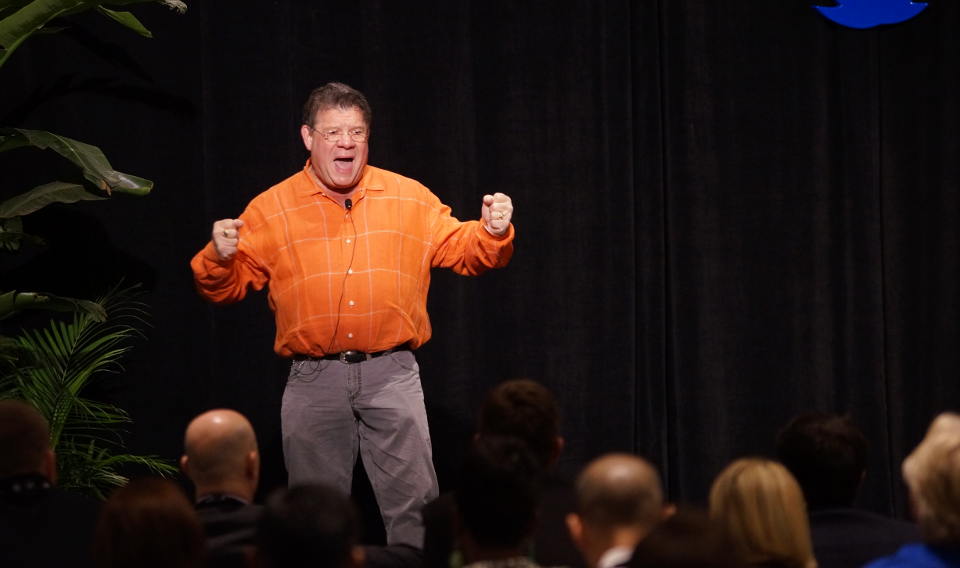 The Summit keynote was provided by long time sales veteran and current CEO for MobileDay, Howard Diamond. Howard took us back in time to the start of his career as a sales professional, that made his living over the phone, and reminded us that "sales is sales". He emphasized a long-time association belief that it’s all about people and they are on both sides of the equation. As leaders, it’s our responsibility to never forget that.

Howard set a tone that continued with an insightful, fact-filled presentation from Ken Krogue, Founder and President of InsideSales.com. Ken shared some fascinating results of recent research studies, as well as trending best practices for leading an Inside Sales organization. The morning continued with a thought provoking glimpse into modern day Inside Sales from Sharon Prosser, Group Vice-President at Oracle Direct. The morning concluded with lively, tip-filled sessions focused on leadership from Inside Sales notables, Steve Richard, Co-Founder of VorsightBP, Lauren Bailey, Founder and President of Factor 8 Sales Training, and Nick Hedges, CEO, Velocify. 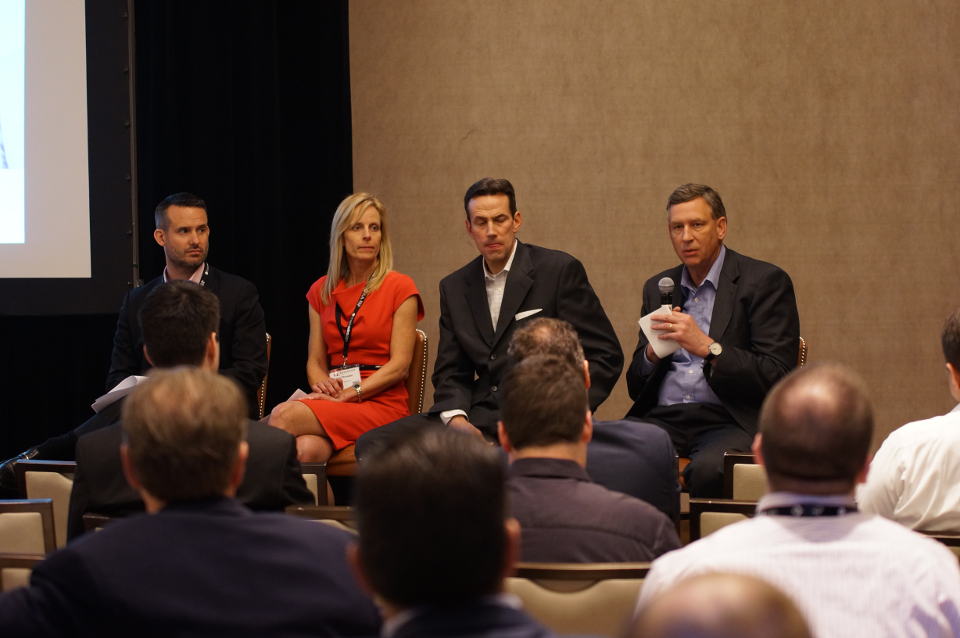 Following a hearty, conversation-filled lunch, attendees gathered in topic specific breakout sessions and interactive panel discussions led by many of the almost 60 Inside Sales experts in attendance. A wide variety of topics were offered in several categories including leadership and development, inside sales strategies, and technologies, tools, and social selling. A highlight included the highly acclaimed and first ever AA-ISP Women & Inside Sales Leadership Panel discussion hosted by long-time sales leader and AA-ISP Boston Chapter Co-President, Lori Richardson. The panel was well attended and featured a diverse group of successful women sales leaders including Pam Flory, Dir. of Inside Sales at Optical Cable Corp., Kelly Molander, Dir. of Global US and Market Dev. at TIBCO, and Jan Marino, CEO, High Gain Co.

The afternoon continued with insightful messages from several AA-ISP members highlighting the value of membership, as well as reinforcing the message that "Success is Calling". The take away - the future is bright but we must take control and we all must identify and face the challenges ahead and continually "drive" ourselves to improve. 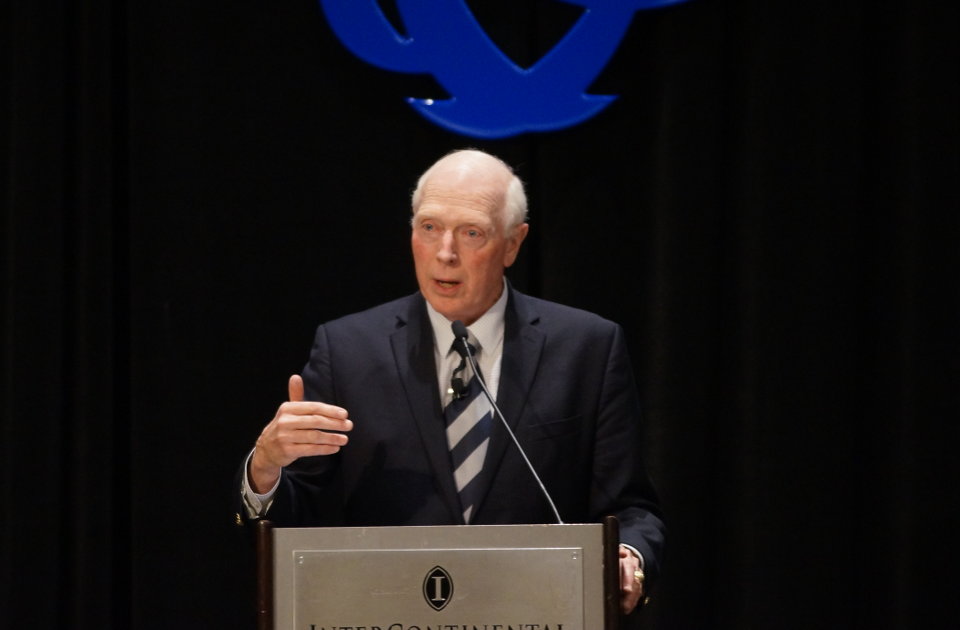 As is Summit tradition, the afternoon sessions ended on an inspirational note which featured a strong message on 21st Century Leadership from Retired Lieutenant General Dan Christman. General Christman discussed his experiences during the five years he led West Point Military Academy, as well as his early years there as a cadet and how he struggled to overcome the many challenges and ultimately graduated first in his class. He had everyone’s full attention as he weaved in leadership lessons learned over the years and shared stories such as his time as assistant to the Secretary of State where he led the nuclear arms discussions with the (then) USSR. He left us on a tender note as he shared a personal story about AA-ISP Founder, Bob Perkin’s oldest brother, George Perkins, who graduated West Point with honors, but due to health issues, passed away at a far too early age. General Christman touched us all as he spoke of the leadership young George had been known for and the caring he displayed for his team: a trait shared by the younger Perkins and embraced by the AA-ISP. The General went on to challenge us to look at ourselves and to commit to becoming better leaders as we forge into the 21st Century! 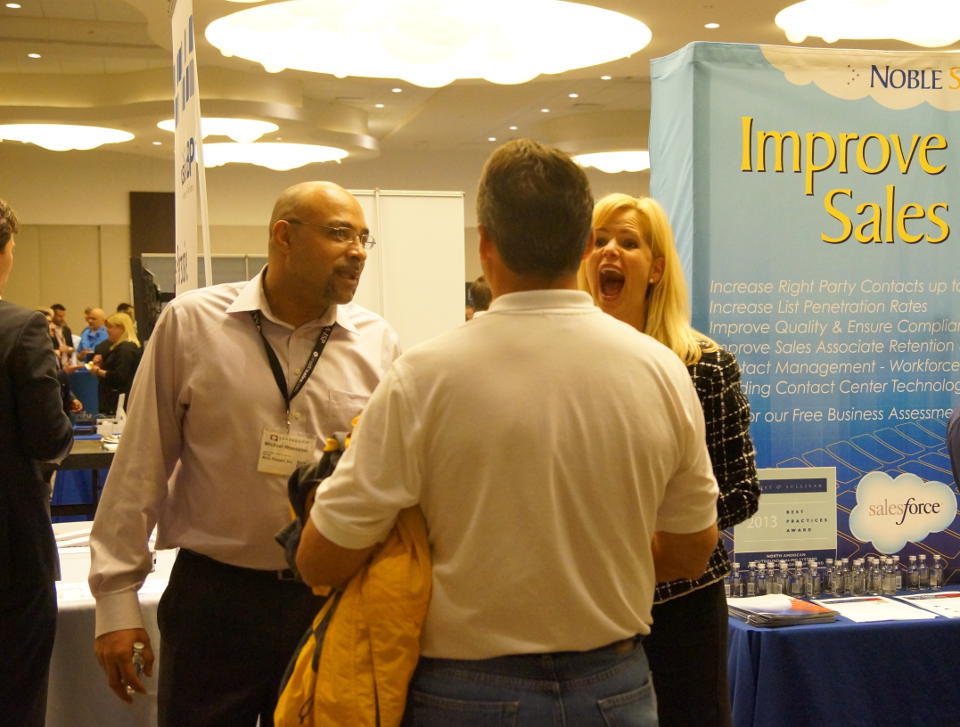 The first day concluded in a fun, relaxing manner with the annual AA-ISP Networking Reception where attendees got to visit and meet with over 40 leading technology and service providers and about a dozen of today’s leading authors. In addition, there was plenty of great food and refreshments as attendees mingled with the conference presenters and networked with fellow attendees. Some ended the night by hitting downtown Chicago late into the night. 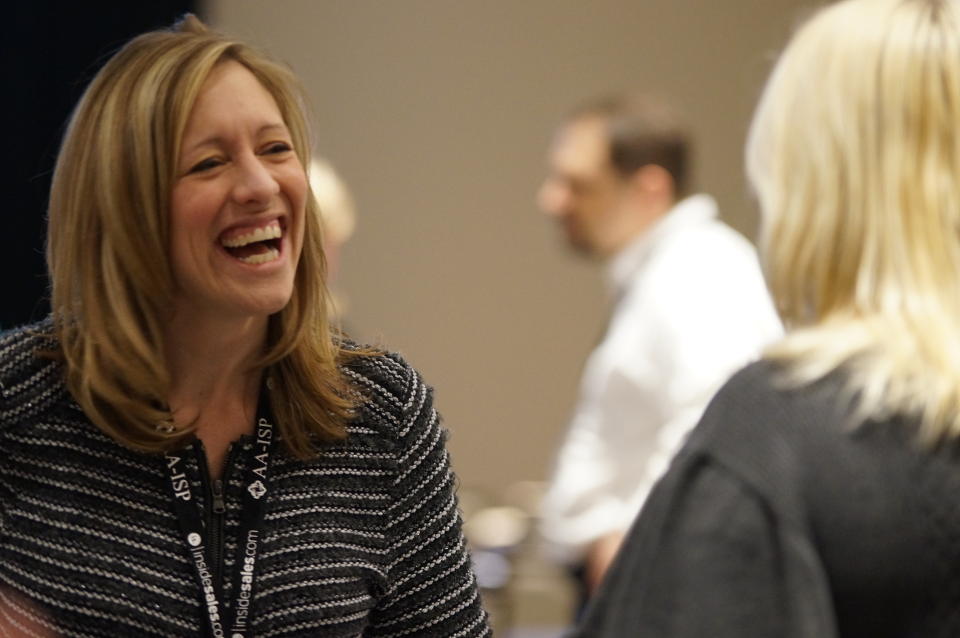 Day two began with a Summit favorite, the optional Birds of a Feather breakfast. Attendees had the option of over 15 round table discussions being hosted by fellow AA-ISP Members with topics ranging from Global Challenges, to Sales and Coaching, to Technology, and everything in between. We often hear that for some, the Birds of a Feather breakfast and the chance to share with their peers is one of their favorite aspect to the Summit.

The morning general sessions started with announcements, updates, and news from the AA-ISP including the continued growth in membership, the expansion of the international community, the launch of the AA-ISP Mentor Program and, in keeping with the "year of training and development" theme, the announcement of the AA-ISP Accredited Inside Sales Manager AISM® Program which was applauded loudly by attendees. As Chairman, Bob Perkins stated one of our biggest challenges facing our profession is finding and developing leaders. The Accredited Inside Sales Manager AISM® is designed specifically for that and is another example of how the AA-ISP helps to address the needs of our community. 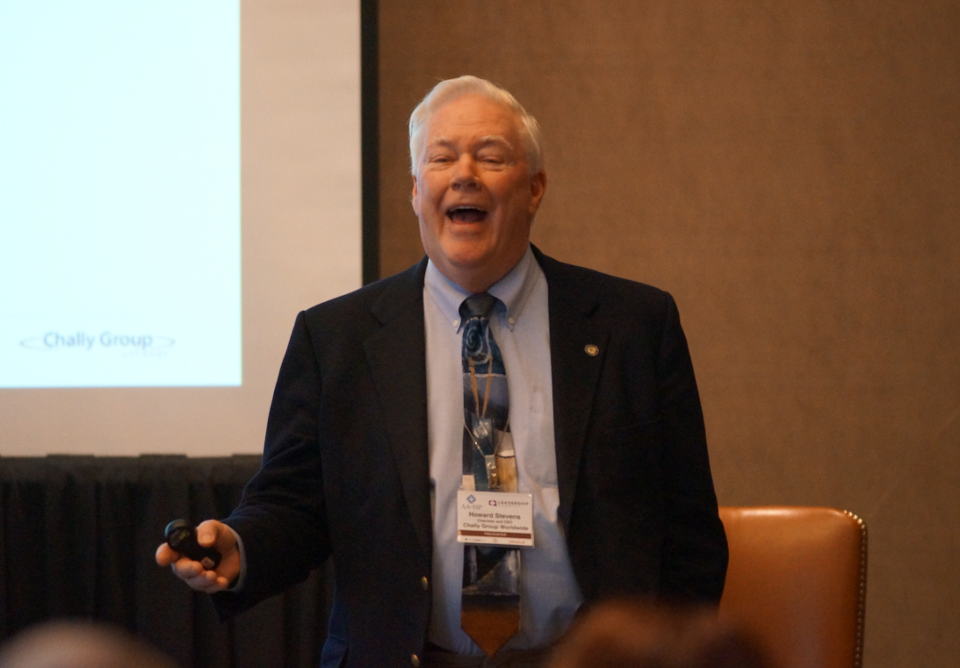 As is tradition at the Summit, the Annual AA-ISP Awards Banquet was held on April 9th and was hosted by longtime AA-ISP member and San Francisco Chapter President, Ralph Barsi, Senior Dir., Sales Dev. at Achievers. The Banquet started with nationally known comedian Jamie Campbell who provided a light-hearted comparison on being a comedian versus an Inside Sales professional that had everyone laughing and thinking that maybe we weren’t all that different. Los Angeles Chapter President and Founder of Inside Sales by Design, Dionne Mischler, got the award ceremony started with some heartfelt opening comments. 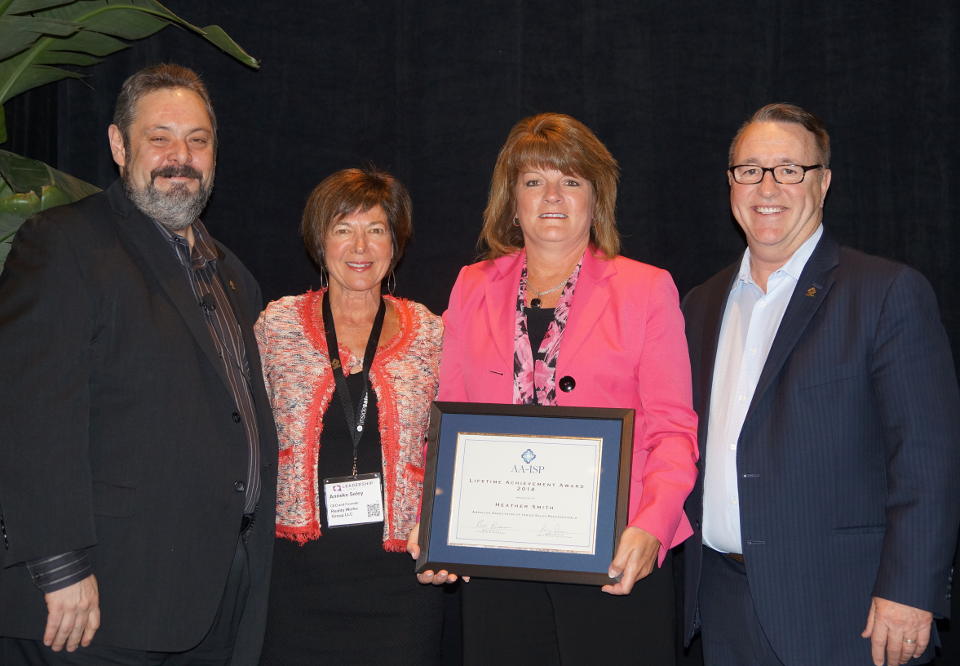 The award ceremony continued with the presentation of the AA-ISP Scholarships and went on to honor outstanding individuals within the inside sales community by awarding the AA-ISP Member and Service Provider of the Year awards, and the Chapter Program awards. The year’s Top 25 Most Influential Inside Sales Professionals were announced and longtime Inside Sales leader Heather Smith, Dir. at Xerox, was presented with the AA-ISP Lifetime Achievement Award. The AA-ISP went on to recognize the vast group of volunteer sales leaders who serve as Chapter Presidents, Officers, and/or Advisory Board Members. The luncheon ended with closing remarks from long time Inside Sales supporter and President of 2014 AA-ISP Underwriter, Insidesales.com, Ken Krogue. To view all winners, please visit the AA-ISP Awards Page.

The Summit continued on a high note with outstanding presentations that examined a number of emerging trends. This included a look into the changing sales landscape and what we need to do to survive from Jeff Perkins, Global VP at PGi, as well as a detailed review of proven techniques for attracting and developing top talent from Chad Burmeister, VP, Sales and Marketing, ConnectAndSell. This dove-tailed nicely with Bill Hu, Dir. of Corporate Sales at Xactly as he discussed some of the secrets to inspiring and motivating teams. The final session ended with social selling expert, Koka Sexton discussing current best practices and strategies for effective social selling. The Summit concluded with closing comments from AA-ISP Founder and Chairman, Bob Perkins and CEO, Larry Reeves as they reminded everyone that "Success is CALLING"!!

Looking back, the 6th Annual Leadership Summit provided another opportunity for our ever growing community of Inside Sales leaders to come together to learn, share, and network. Once again, the Summit received high marks from attendees who sent a loud message: the 2014 AA-ISP Leadership Summit delivered outstanding, content-rich presentations, highly interactive group discussions, and informative, relevant breakout sessions. Attendees came away revitalized, recharged, and armed with the latest knowledge, tools, and techniques to help them take their Inside Sales organization and themselves to the next level of professionalism and performance.

LS 14 Conference slides are available for download to AA-ISP Professional and Corporate members from the list on this page, or the conference slide library.

View recaps from other years: